Those of you who may be familiar with the film Toy Story will know who I mean when I mention the character Buzz Lightyear.

Buzz is a sort of spaceman toy whose catchphrase is “To infinity, and beyond!”

This afternoon I would like to think a little bit about the idea of infinity, and ask ourselves whether it has any religious meaning for us today.

As chapel attenders we may be a little more familiar with the concept of eternity. Eternity relates to time. We often come across references to it in scripture and in our prayers. I frequently begin a prayer by saying “Eternal Spirit,…” and in Ecclesiastes chapter 3 we read that God “has set eternity in their hearts”, meaning humanity’s hearts.

I would like to briefly consider two different expressions of infinity and use them as examples if I may. One is a secular reference, and the other is from scripture. 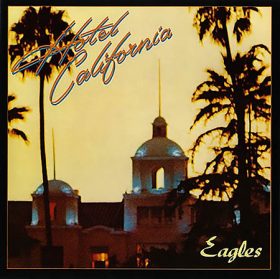 I’m really testing your familiarity with popular culture today, and my first reference is from the song “Hotel California” by The Eagles. In the song there are lines which go:

“Plenty of room in the Hotel California…
You can check out any time you want,
But you can never leave…”

– which of course is a rather sinister observation.

I have chosen it as a reference because, according to infinity theory, it is impossible (for example) to leave a room.

In order to leave a room, we accept that we have to travel half way to the door to begin with. Then we have to halve the remaining distance in order to approach the door. Then it is necessary to cross half again of the distance which still remains between ourselves and the exit. And so we go on in this way, always halving the distance between ourselves and the door, but of course never actually completing the whole distance.

By always halving it, the distance to the door becomes infinite. “You can check out any time you want, but you can never leave…”

Of course such ideas belong firmly in a parallel universe, but at the same time they are the stuff of mathematics here and now.

The second example I was going to refer to might be an early instance of infinity theory in the New Testament.

You will remember the miracle of the feeding of the five thousand. Jesus fed a large gathering of followers with the five barley loaves and two fishes which a lad had brought along.

According to infinity theory, if you cut a cake in half, and then into quarters, then eighths, and sixteenths, and thirty-seconds, and so on and so on, at the end of the process you will always be left with one piece.

Did the miracle of the feeding of the five thousand mean that Jesus understood infinity theory and could somehow implement it? You may think this implausible and impossible, but then that is what miracles are…

As we said, as chapel-goers we are more familiar with the idea of eternity than infinity. Eternity is to time, what infinity is to number and space.

If there were an infinite number of rooms in the Hotel California, no matter how many people came to stay, there would always be one vacancy.

Dame Julian of Norwich and William Blake both recorded visions of infinity, not endlessly large, but endlessly small.

To see a world in a grain of sand,
And a heaven in a wild flower;
Hold infinity in the palm of your hand,
And eternity in an hour…

And the same almost delirious hallucinogenic quality is present in the vision Julian of Norwich recorded:

“And in this he showed me a little thing, the quantity of a hazelnut, lying in the palm of my hand, as it seemed. And it was as round as any ball.
I looked upon it with the eye of my understanding, and thought, ‘What may this be?’ And it was answered generally thus: ‘It is all that is made…”

Do these mind-bending ideas offer us comfort, or just bewilderment?

Infinity theory will tell us that parallel universes do exist, and that at this very moment, a congregation of ourselves is sitting down elsewhere, and feeling as confused as we are, listening to exactly this same homily.

I want to say thank goodness we do not have to rely on quantum physics and its associated speculations if we wish to find our own spiritual enlightenment and comfort.

One of Jesus’ best-known sayings has brought enormous comfort to countless individuals caught up in all the trauma of loss and bereavement [John 14,2]: In my Father’s house are many mansions… I go to prepare a place for you.

On the face of it, it may be read as a promise of a heavenly hereafter. And yet there is still something of infinity theory about it too.

O God unseen yet ever near, wherever there are souls that seek thee, there is the house of God, and there the gate of heaven. Help us to turn aside from inward littleness, that we may stand as upon holy ground. If we are heavy laden, here may we lay our burden down. If we are thirsty, here may we find the fountain of life. If any glad light be on our path, here may we lift our eyes to the sun that sends it. So may we comprehend the height and depth of that perfect love, which finds its all, in all, in thee. Amen.